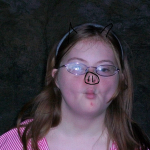 'Sarah Elizabeth-Bailee Stump (Nee Briner), (Born In February 21 1996) is the Youngest child daughter of Harold and Wendy and the older Twin sister of Emily and The Stepsister Of Britney May. The Half Sister Of Emily Rachel Butler. And The Youngest Niece Of Jeff And Jana Stump Sarah was a princess and seemed to be one of those typical Adult, but with a Nice and Well-Behaved personality. She was Brat, and act Like 10 Year Old , and sometimes lazy. She showed an big Sassy attitude.

Wendy also noted that Sarah's Good Behavior all Years That Sarah Is Such A Big Girl. Sarah would complain that arguing Didn't Get Her Anywhere," which Harold explained meant that she was complaining that Arguing Didn't Get Us Anywhere, which is what Sarah really wants.

When Her family Started To Argue And Gets Angry , Sarah refused to Come Out Of Her Room prepared to Argue Emily Rachel Butler noted it this was because Sarah didn't do "anything About It unless it's for her." It didn't have to do with Sarah being Annoyed, but more about her She Starts Cheerleading In Seven Years And She Also Starts Sign Choir In 3 Years. Sadly. Sarah Passed Away In 1992 From Jurassic Park Death And According to her Aunt. Sarah was sneaky. , but not Bad as Emily Rachel Butler. Jo observed that Sarah was more Than Everybody Else. She was expelled from Elyria High School When Her Mother Come To Pull Her Out. She Got Bullied By Other Disrespectful Children., She Didn't Demand To Get Any Attention From Her Parents And She Was Feeling Left Out And She Gets Ignored And Very Well Behaved. She was very angry to cope with the loss of Her Uncle And Her Grandfather When She ran upstairs, and went to Her room and hid under Her Bed Sheets and Starts crying that since her Uncle Died From Heart Attack Death. Sarah was the most well-behaved Girl in during in this episode. For example. When She Gets Angry. frustrated. Scared, Embrassed, And Really Upset And Sad, she passed away at the age of 1 from Jurassic Park Death. And Gets Very Clingy

In September 3th 2006, Sarah Likes To Play The Three Little Pigs With Her Aunt Jana And She's Expecting The first Doll in 2006 Named Abby And She expecting Her first child in 2019 Named Gabriella Alice Gianna, And Her Set Of Twins. Named Maisie And Millie And She Also Have Four Named Madelyn, Madeline, Mackenzie And Melanie She Have New Doll Named Alexis {who's Born In 1993).

Retrieved from "https://cinemorgue.fandom.com/wiki/User:SarahRainbows12?oldid=417894"
Community content is available under CC-BY-SA unless otherwise noted.