In Glenview, Ohio, four pals -- Evan (Ben Stiller), Bob (Vince Vaughn), Franklin (Jonah Hill) and Jamarcus (Richard Ayoade) -- form a neighborhood watch group. Armed with flashlights, walkie-talkies and spiffy new jackets, the guys try to take their mission seriously, even if they spend a little time goofing off now and then. But when they discover aliens living among them, and no one believes their story, they learn that they have to kick things up a notch to save the world from annihilation. 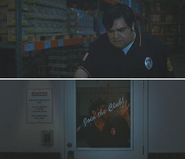 Joe Nunez
Add a photo to this gallery
Retrieved from "https://cinemorgue.fandom.com/wiki/The_Watch_(2012)?oldid=604629"
Community content is available under CC-BY-SA unless otherwise noted.