When the menace known as the Joker (Heath Ledger) wreaks havoc and chaos on the people of Gotham, the caped crusader (Christian Bale) must come to terms with one of the greatest psychological tests of his ability to fight injustice. 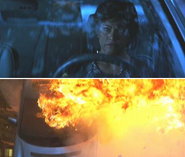 Danny Goldring
Add a photo to this gallery

Retrieved from "https://cinemorgue.fandom.com/wiki/The_Dark_Knight_(2008)?oldid=647138"
Community content is available under CC-BY-SA unless otherwise noted.