Create the page "Death scenes by fork" on this wiki! See also the search results found. 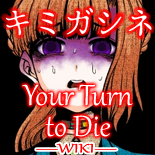 Your Turn to Die Wiki

The Your Turn to Die Wiki is an online encyclopedic database for everything about the free online game, "Kimi ga Shine ―Tasuketsu Death Game―" (キミガシネ ―多数決デスゲーム―) or "Your Turn to Die ―Death Game By Majority―," created by Nankidai and translated by…