Married Cartoonist C.C. Drood (Tom Hulce) gets out of his depth when he's embroiled in sex scandal cover up after his mistress call girl Yolanda Caldwell (Virginia Madsen) is slain. Things go from bad to worse for Drodd when said homicide is pinned on him, with Yolanda's girlfriend Bobby Nye (Millie Perkins) dispatches troubled contract killer Buddy (Don Opper) to execute Drodd, even though Buddy may have been involved in Yolanda's homicide and guilt over it is steadily getting to Buddy 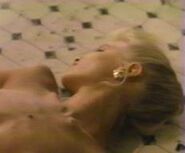 Lisa Niemi
Add a photo to this gallery
Retrieved from "https://cinemorgue.fandom.com/wiki/Slam_Dance_(1987)?oldid=491126"
Community content is available under CC-BY-SA unless otherwise noted.