On the hunt for the twisted vigilante and serial killer Jigsaw (Tobin Bell), Detective Eric Matthews (Donnie Wahlberg) and his team must apprehend the elusive murderer to rescue eight people trapped in an abandoned house, before they succumb to his torturous and murderous games. One twist to this task is that Matthews' own son, Daniel (Erik Knudsen), is among the eight people Jigsaw has chosen to test for their lack of morality. With nerve gas pumping through the house, every second counts. 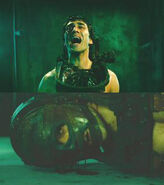 Noam Jenkins
Add a photo to this gallery

Add a photo to this gallery
Retrieved from "https://cinemorgue.fandom.com/wiki/Saw_II_(2005)?oldid=666180"
Community content is available under CC-BY-SA unless otherwise noted.