When a group of strangers at a dusty roadside diner come under attack by demonic forces, their only chance for survival lies with an archangel named Michael (Paul Bettany), who informs a pregnant waitress (Adrianne Palicki) that her unborn child is humanity's last hope. 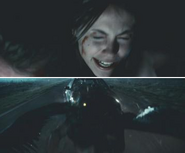 Cameron Harlow
Add a photo to this gallery
Retrieved from "https://cinemorgue.fandom.com/wiki/Legion_(2010)?oldid=646232"
Community content is available under CC-BY-SA unless otherwise noted.