A student's premonition of a deadly rollercoaster ride saves her life and a lucky few, but not from Death itself, which seeks out those who escaped their fate. 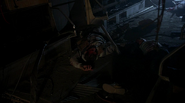 Texas Battle
Add a photo to this gallery
Retrieved from "https://cinemorgue.fandom.com/wiki/Final_Destination_3_(2006)?oldid=666162"
Community content is available under CC-BY-SA unless otherwise noted.