Edit
watch 01:33
Wiki Targeted (Entertainment)
Do you like this video?
Play Sound

Austrian prince and CIA contractor Malko Linge (Richard Young) hosts a party in his castle that is abruptly interrupted by an attack from a group of terrorists lead by Nassiri (Ben Cross). Malko and his henchman Elko (Paul L. Smith) manages to saves most of the attendees and defuse some bombs, but some hostages got killed and the castle is severly damaged.

An arms dealer called Khashani (Ben Feitelson) is killed by the middle-man (Mike Marshall) in a biological weapon transaction that gone wrong. His wife Sharnilar (Annabel Schofield), a retired model, is later assaulted by Nassiri and his crew. She then loses one eye and gets disfigured.

The CIA finds out the attack at the castle, the murder of Khasani and the aggression of his widow are all three related. Malko is offered to work on the case. In return, the CIA would pay for the castle repairs.

The terrorist group and the middle-man work both for another arms dealer, Kharoun (F. Murray Abraham), who was a business and love rival of Khashani. 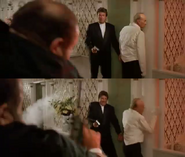