In 19th Century France, a young Bram Stoker (Kevin Alber) is captured by a man-hating, all-female cult of thong bikini wearers. Aided by flesh-eating rats, the warrior women raid the lairs of evil men and punish them. Our hero must decide between his wish to escape the dangerous cult and his love for one of its members (Maria Ford). 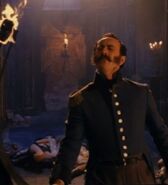 Adrienne Barbeau
Add a photo to this gallery
Retrieved from "https://cinemorgue.fandom.com/wiki/Burial_of_the_Rats_(1995)?oldid=524126"
Community content is available under CC-BY-SA unless otherwise noted.