Note: As a professional stunt performer, Brianna has probably "died" in place of several other actresses, through specific examples are not known. 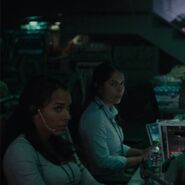 Brianna Goldie (left, with Agueda Cardenas) before their off-screen deaths in Suicide Squad
Add a photo to this gallery
Retrieved from "https://cinemorgue.fandom.com/wiki/Brianna_Goldie?oldid=619262"
Community content is available under CC-BY-SA unless otherwise noted.