a.k.a. Aldo Brell or Aldo Sambrelli, various other alternate spellings 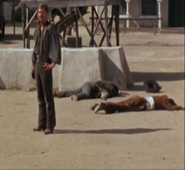 Aldo Sambrell lying dead (on left) in A Fistful of Dollars

Aldo Sambrell dead in For a Few Dollars More
Add a photo to this gallery
Retrieved from "https://cinemorgue.fandom.com/wiki/Aldo_Sambrell?oldid=641772"
Community content is available under CC-BY-SA unless otherwise noted.