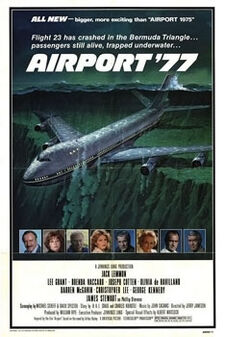 The story about the mid-air hijack of a multi-millionaire's (James Stewart) private 747 carrying a collection of priceless works of art. The terrified pilot (Jack Lemmon) is forced by the hijackers to fly low to avoid radar detection and, as a result, the plane hits an oil rig and crashes into the sea. As the stricken airliner sinks, its passengers and crew are faced with a nightmare fight for survival.

Maidie Norman
Add a photo to this gallery
Retrieved from "https://cinemorgue.fandom.com/wiki/Airport_%2777_(1977)?oldid=608448"
Community content is available under CC-BY-SA unless otherwise noted.